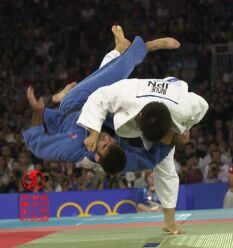 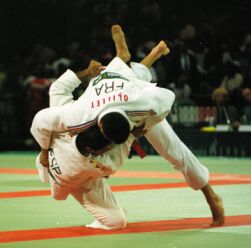 Judo had its origin in the ancient Japanese art of jujutsu, a system of hand-to-hand combat.  The bushi of feudal Japan (samurai) are usually credited for developing jujutsu (at their time the art was known as Yoroi kumi-uchi, a grappling method for fighters fully clad in Japanese armour).  However, the Nihon Shoki (the Chronicle of the Japanese nation) documents public unarmed competitions (hikara-kurabe) dating back to 230 B.C.
Jujutsu has been known by several names throughout Japanese history: taijutsu, yawara, kempo, kugusoku, kumiuchi, koshinomawan.  What is unique to the art is that one did not use brute strength to overpower an opponent, but rather skill, finesse and flexibility.  Economy of energy, balance, and grace were the outstanding hallmarks of the good jujutsu practitioner.  Unlike the Western hand-to-hand fighter, the jujutsu fighter was expected to be soft and pliable, winning by appearing to yield.

In classical form, during the feudal period, jujutsu was part of the bushi training, along with archery, spearfighting, swordsmanship, horsemanship, manoeuvring, and etiquette.  Its importance grew with the rise of the bushi class after the late Heian period.  Throughout subsequent periods of Japanese history (Kamakura, 1185-1336; Muromachi, 1336-1573 into the Tokugawa period, 1603-1868) the art became more diversified and specialized, being taught in schools (ryus). Ryus organized around different aspects of the art, perpetuating their founders' vision.
The schools differed in emphasis and strategy.  Some specialized in throwing (nage), others in groundwork (osae, shime, kansetsu), and others in striking (atemi).  In matters of strategy, some schools valued taking the initiative in combat while others preferred timely reaction to an opponent's aggression. Those that followed the principles of swordsmanship insisted on sudden, total attack. Others preferred to neutralize the opponent's attack once it was in motion.

Given the constant state of war in Japanese feudal history, ryus tested their vision of jujutsu on the battlefield, where the premium was on survival.  The three hundred years of peace that followed the Japanese civil wars led to a change in the nature of the art.  Under the harsh Tokugawa martial codes combats between bushi became rarer and heavy warfare far less frequent.  On the other hand, unarmed combat became more common.  The rise of the common citizen at the end of the period required that jujutsu techniques be adapted to the needs of everyday life.
At that time, several ryus lost their insistence on ceremonial or ritual posturing in favor of a more practical approach to hand-to-hand combat.  By the end of the Tokugawa period, the ancient martial arts of Japan (Bujutsu) created for the warrior class began to lose importance as the martial ways (Budo) created for the commoner gained ascendancy.  Budo was not simply a collection of fighting techniques but also a spiritual discipline, a way of life.

During the Meiji Restoration after 1868, the transition from Bujutsu to Budo was completed.  Several branches of the martial arts changed names and orientation entirely.  Kyujutsu became Kyudo, iai-jutsu became iaido, aiki-jutsu became aikido, and jujutsu became Judo.  There was a shift from warfare techniques to everyday life principles, with the spiritual side of the arts being more emphasized.  Schools now passed their tradition to students in the form of techniques, philosophy and codes of ethics.  Students were expected to be fully versed on hand-to-hand combat, but also to embody the philosophy of the ryu's founders.